Learning to budget in the time of COVID; Selkirk delivers despite pandemic challenges

Submitted by the City of Selkirk

The work that goes into putting together the city’s budget every year was tempered by a heavy dose of COVID-19 this year, and while the end result is quite pleasing it comes with some caveats. Most notably, the unpredictable nature of the virus may play a bit of havoc with the city’s best-laid plans.

Still, Selkirk once again completed its budget before 2020 was finished with us, delivered the lowest tax adjustment in over eight years and filled budget 2021 with several asset management driven infrastructure improvements.

But the difficulties of planning under the backdrop of a global pandemic can’t be understated.

Mayor Larry Johannson acknowledged the COVID affect and said there’s no getting around it – COVID had a seat at the table for this year’s budget discussions.

“Council and administration worked hard on keeping things affordable because of COVID, we needed to manage the uncertainty. It’s difficult to plan in a year where you’re not entirely clear what you’re going to be able to do or not do,” Johannson said.

“We were planning for things to return to normal to a certain extent and have work planned for spring, summer and fall, but there’s a good chance they might be delayed depending on vaccination and infection rates.”

The 1.5 per cent increase is lower than the City of Winnipeg’s 2.33 per cent and the provincial government’s reported consumer price index, which, at 2.2 per cent, is a whopping 47 per cent higher than Selkirk’s property tax increase.

Selkirk residents will pay an average of $3.50 a month more in 2021 in taxes, and in return will get improved infrastructure – including the opening of the new wastewater treatment plant, the city’s largest ever capital expenditure – better parks and trails and hopefully, the water tower will get its much-needed facelift this year.

By comparison, you may have received a notice that your Internet bill is going up this year at a rate almost double the city’s increase.

“A major Internet provider in the region just announced that their fees are going up $6 a month, and you’re getting nothing new there or better service, whereas the city’s tax increase is about $3.50 on average, and you’re getting improved services and infrastructure,” said Chief Administrative Officer Duane Nicol.

Pandemic or not, the city stuck to its Strategic Plan and its asset management program while creating the budget, as they do every year.

“Our project selection is all done with our asset management program which allows us to select the most cost-effective work to be done in the most timely fashion,” Nicol said.

The year’s work is slotted into the appropriate pillar of the five pillars that make up the Strategic Plan – Vibrant, Safe and Healthy Community, Strong and Stable Local Economy, Safe and Sustainable Infrastructure, Maximum Value from Community Resources and Environmental Stewardship.

The Strategic Plan was set for a review last year, but due to the fact public consultation – essential to the plan’s validity – couldn’t properly take place in 2020, a review is scheduled for this year.

“We want to renew our Strategic Plan, however it will be subject to our ability to properly engage with the citizens of Selkirk,” Nicol said.

“It’s too important to rush and not do a good job of engaging the people who are the rightful authors of the Strategic Plan.”

The city’s largest ever capital investment – a new $39 million wastewater treatment plant – will open this year and is already an environmental and economic success.

The plant will treat effluent to a higher standard than is required under provincial regulations and was built to a smaller size but will still be able to handle today and tomorrow’s wastewater due to technological superiorities and the city’s plan to take advantage of existing infrastructure to handle the load.

“Our wastewater treatment plant is a bold statement about Selkirk’s commitment to protecting the environment. We live beside the Red River, which flows into Lake Winnipeg and council, administration and all staff take great pride in our investment in the best technology of the day to protect the health of both those bodies of water,” Nicol said.

Work on the wastewater treatment plant began in 2018.

The city’s Active Transportation Strategy will be finalized in 2021, and though investing in infrastructure that allows people to get outside and move is always a good strategy, COVID has shone a light on just how important outdoor activity is.

“We’ve seen a lot of other cities during the COVID period step up their game with bike paths and their own active transportation program,” Nicol said.

“But in Selkirk we had been working on that strategy for the past couple of years and we’ve seen progress already, with the paths along Manitoba Avenue West and in various parks. We expect to have Selkirk’s Active Transportation Strategy finalized in this year, which will guide investments into those things going forward.”

The city has been investing in park, trail and active transportation planning, perhaps even more than usual, because it’s anticipating that government dollars are going to be available when the effort to kick start the economy begins in earnest.

“We expect that there’s going to be some potential for grant dollars in the near future, as the province and the federal government try to get the economy firing up,” Nicol said.

“A lot of our thinking has been making sure the plans are in place to align with some of those priorities that we are hearing from the provincial and federal governments, and it’s also the same stuff that we know Selkirk citizens value. The work done outdoors has a huge ROI (Return on Investment) and this past year is a prime example. Every dollar you put into a park, you get big dollars out of it in terms of services and benefit for citizens.

“There’s no better ROI in human investment for a municipality than parks and libraries.”

The city will invest $443,000 to extend the Manitoba Avenue Pathway from Easton Drive to Main Street.

The city has allocated $40,000 to a West End Regional Park Needs Assessment. Plans call for two parks in the west end, a neighbourhood park near the Woodlands retention pond that will feature walking paths and make use of natural features including a forested area and tall grass prairie the city aims to revitalize. A second larger park is several years down the road.

The water tower, which was to be painted last year, is on tap this year, with both the mural and the overall painting carried over from last year’s budget. Comp graduate Robyn Kacperski’s design will be featured high above the city skyline on the water tower after her artwork was selected from more than 30 submissions.

In 2021 the city will continue to make progress on both its Climate Change Adaptation Strategy and its Greenhouse Gas Reduction Plan. Projects include the installation of a new back-up generator for the water treatment plant at a cost of $800,000. Nicol says the investment will ensure the facility can be operational during extended interruptions to power making the utility much more resilient in the face of a changing climate.

“What’s going on in Texas right now, and with what Portage la Prairie experienced in 2019 are exactly the sorts of events all municipalities must be planning for”.

The city will also invest in the replacement of aged equipment such as the fire department’s Vehicle Extrication Equipment. Sometimes called the “jaws-of-life” the extrication unit will cost over $47,000 but is a critical piece of lifesaving equipment for the department. The city has made significant investments into the Fire Department over the past three years including the new firehall and ladder truck.

Infrastructure renewal continues in 2021 with work scheduled for Agnes Avenue, with a Capital Asset Management Program (CAMP)-directed sewer renewal and asphalt reconstruction with new curbs and gutters that is expected to begin this spring or early summer. A sidewalk will be added from Manitoba to McLean and connect with the existing sidewalk.

Curb and boulevard repairs will be done on Robinson, and an investment into Phase 2 of the Business Park will happen in 2021 as well.

Eveline Street between Eaton and Queen streets will be reconstructed and brought up to today’s standards for roads, curbs and land drainage, Nicol said.

The renewal was identified though CAMP, but also supports the city’s downtown revitalization efforts. Public engagement was part of the road travelled to get to this point and a survey sought input on everything from speed and traffic control to parking and sidewalks to bicycle and pedestrian safety.

Work on the $6 million project is slated to begin in May.

Over the years, I have collected some very interesting sayings that churches have put on their outdoor changeable signboards.
Read more
- Advertisement -

Over the years, I have collected some very interesting sayings that churches have put on their outdoor changeable signboards.
Read more
News

Glow Fitness continuing to glow for the local community

Members of the Glow Team from Glow Life Fitness in Selkirk, Man., embark on a fitness field trip each month as a...
Read more 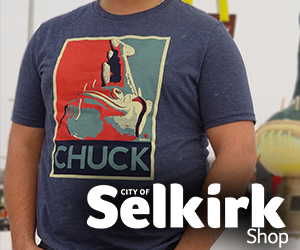